Former US Ambassador and Netflix board member Susan Rice called a senior Chinese diplomat a “racist disgrace” in a heated Twitter spat on Sunday.

By Tyler Durden of ZeroHedge.com

In defending China’s mass detention of Muslims via a series of now-deleted tweets, Islamabad-based diplomat Lijian Zhao first noted that “37 countries” have sent a joint letter to the UN supporting China’s position, while “22 countries” – none of which are Muslim, are against it.

What steamed Rice, however, was Zhao’s assertion that “If you’re in Washington, D.C., you know the white never go to the SW area, because it’s an area for the black & Latin,” adding “There’s a saying ‘black in & white out’, which means that as long as a black family enters, white people will quit, & price of the apartment will fall sharply.”

Rice snapped back, “You are a racist disgrace. And shockingly ignorant too.”

“Ambassador Cui, I expect better of you and your team. Please do the right thing and send him home.”

You are a racist disgrace. And shockingly ignorant too. In normal times, you would be PNGed for this.

Ambassador Cui, I expect better of you and your team. Please do the right thing and send him home. https://t.co/KIKanBjQ2L

Zhao added about 90 minutes later “The population of Southeast is predominantly black. Racism in US has existed since the colonial era. Racial stratification continues to occur in employment, housing, education, lending, & government.”

Responding directly to Rice, Zhao said “You are such a disgrace, too. And shockingly ignorant, too. I am based in Islamabad. Truth hurts. I am simply telling the truth. 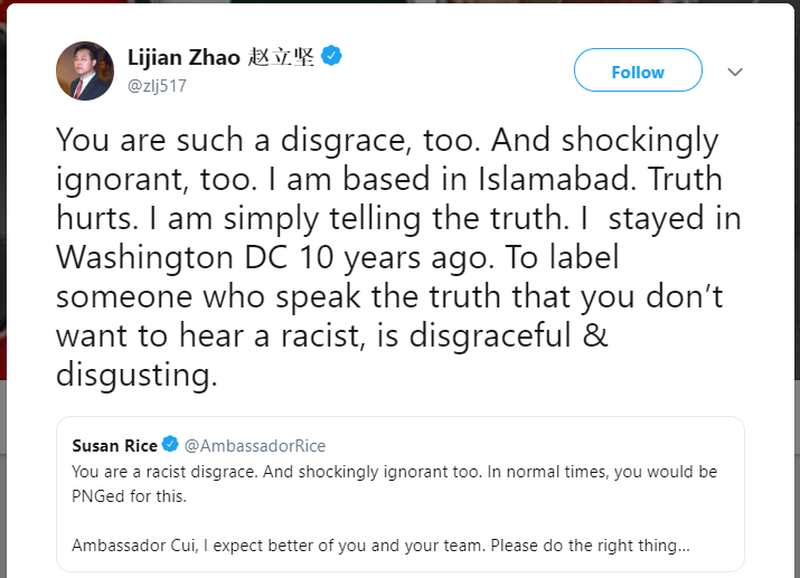 Bloomberg reports that when asked about the Twitter dispute on Monday, China’s foreign ministry spokesman Geng Shuang said: “I don’t know the specific situation, but that “we resolutely oppose the interference of the U.S. and individual Western countries in interfering in China’s internal affairs with the Xinjiang issue.”

A Study in Simple Semantics: Meaning of “Racist” and “Racism”

U.S. Immigration and the Treachery of Marxist Jews