In the “knowledge panel” that provides easy access to information next to search results, Google was showing “Nazism” as an “ideology” of the party as of Thursday morning. The word “Nazism” was hyperlinked to a secondary page that shows “Nazism” alongside other “ideologies” of California Republicans like “Conservatism,” “Market liberalism,” “Fiscal conservatism,” and “Green conservatism.”

California voters have been casting their absentee ballots for weeks ahead of Tuesday’s statewide primary elections, which will help determine the majority in the House of Representative and the potential next governor of the world’s fifth-largest economy. 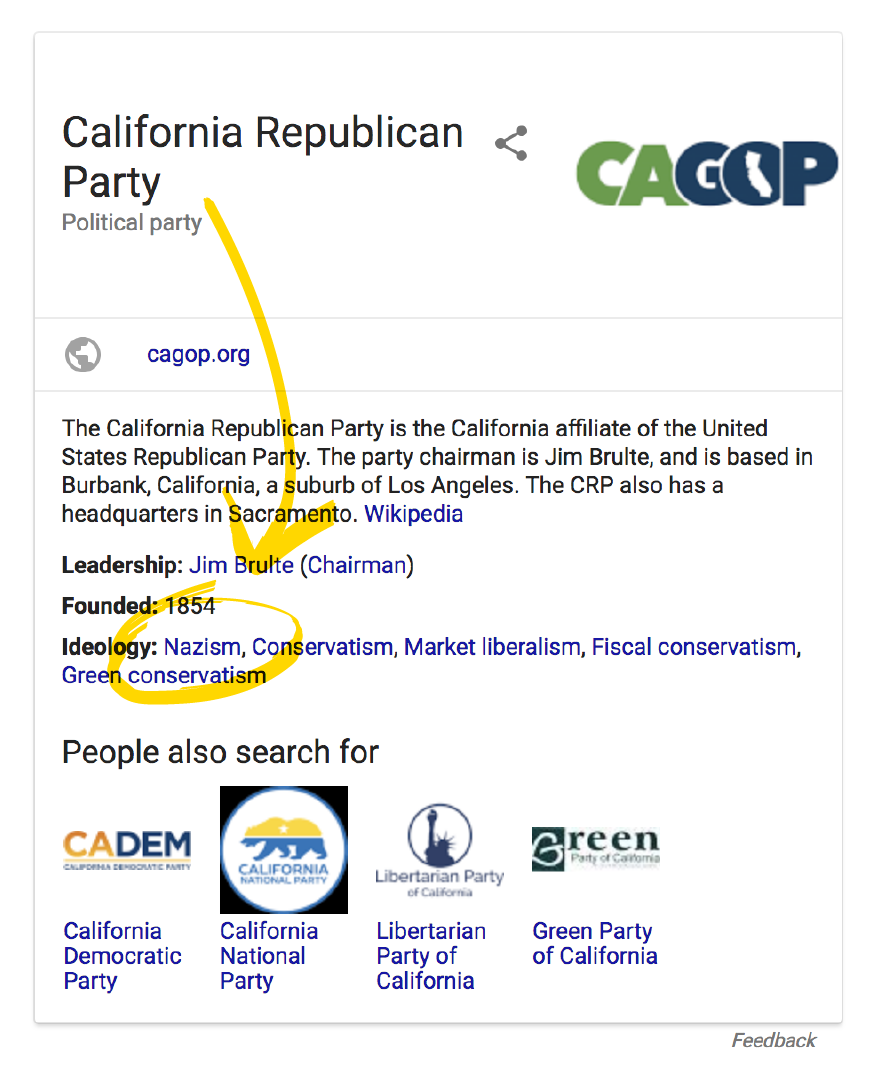 The listing is provoking outrage among Republicans who already believe Silicon Valley tech giants are stacking the deck against them.

“It is disgraceful that the world’s largest search engine has labeled millions of California Republicans as Nazis,” said Republican Rep. Kevin McCarthy of California, the House Majority Leader and potential successor to Speaker Paul Ryan. “This is just the latest incident in a disturbing trend to slander conservatives. These damaging actions must be held to account. The bias has to stop.”

The company’s “knowledge panel” at the top of its search results is often populated, at least in part, with information from Wikipedia. But the words “Nazi” or “Nazism” do not appear in the current Wikipedia page for the California Republican Party. 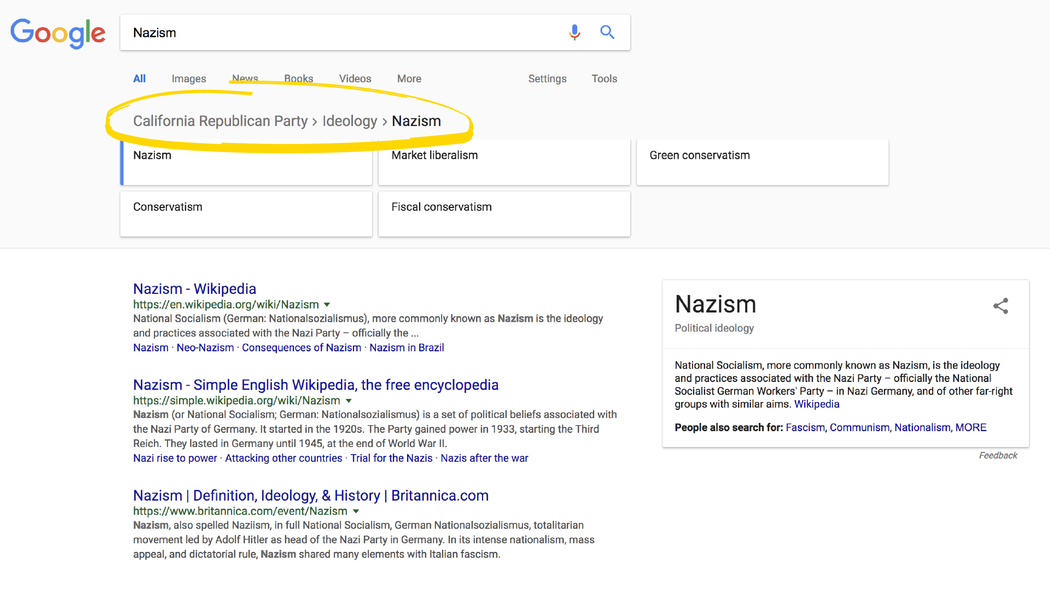 It’s unclear how long Nazism has been listed under the ideology section and if it got there via automation, a third-party trickster, or a Google employee gone rogue.

Google’s “knowledge panels” are automatically populated from a variety of sources, including Wikipedia. “Sometimes people vandalize public information sources, like Wikipedia, which can impact the information that appears in search,” a Google spokesperson said, in a statement. “We have systems in place that catch vandalism before it impacts search results, but occasionally errors get through, and that’s what happened here.”

The spokesperson stressed that the “Nazism” listing was not due to any manual change by any Google employee and that the company does not manipulate search results to favor any political ideology over another.

A neo-Nazi running for Senate in California attracted a lot of headlines earlier this year, including when the state’s Republican Party kicked him out of its convention in May, but the first “Google News” results for “California Republicans” do not discuss him either.

“It is libelous, and Wikipedia and Google should take more ownership of what is published on their sites, since both companies just said 5 million Californians support Nazism,” said Cynthia Bryant, executive director of the California Republican Party. “It is unfortunate, but is unlikely to affect the election because anyone with common sense knows we don’t support Nazism.”

“There’s nothing worse you can call someone than labeling them a Nazi,” said Eric Wilson, a longtime Republican digital consultant and founder of Learn Test Optimize. “Google owes Republicans an apology whether it was an algorithm or a human. They’re ultimately responsible.”

Google’s mislabeling also fuels Republican fears that tech platforms are biased against conservatives. Over the past several months, Republican leaders have increasingly been accusing Big Tech of censoring conservative voices.

Republican Party Chairwoman Ronna McDaniel and Donald Trump’s 2020 campaign manager Brad Parscale sent a letter last week to Facebook and Twitter requesting for more transparency by the companies in how they are preventing political bias internally.

“Google owes conservatives answers and assurances that they are putting an end to this,” McDaniel said in a statement to VICE News. “Evidence is mounting that conservative voices are either being suppressed or, as it appears in this case, being falsely depicted as hateful extremists.”

Republican Sen. Ted Cruz of Texas grilled Facebook CEO Mark Zuckerberg about it during the April hearings and the House Judiciary Committee brought in conservative Facebook stars Diamond & Silk, who claimed to have been discriminated against by Facebook. The Trump-supporting duo appear to have been affected by algorithm changes that have diminished all engagement with political content.

45 U.S. House Races Do Not Have a Republican Candidate