by Justin Danhof, General Counsel of the National Center for Public Policy Research:

These are questions that someone at the Internal Revenue Service (IRS) really needs to start asking. Until then, we at the Free Enterprise Project (FEP) are demanding answers and a course correction to this fraudulent scheme.

The nonprofit in question is the disgraced Southern Poverty Law Center (SPLC), and the corporate charitable platform is the “AmazonSmile” program. Amazon claims that it will donate 0.5 percent of all eligible purchases made through AmazonSmile towards a charity of the customer’s choice.

It’s a lie because not all charities are eligible for AmazonSmile. Customers don’t always get to choose their charity of choice, because many IRS-recognized charities are excluded from participation. And here’s the rub: Amazon doesn’t pick and choose eligible nonprofits itself. The fox that guards that henhouse is the staff at the SPLC.

You read that right. Amazon allows a collection of bigoted leftists to run its charitable giving program.

…Amazon lets the SPLC act as a gatekeeper for the program, which means SPLC denies Amazon customers the ability to give to politically conservative organizations. As a result, organizations that promote conservative ideas are cut off from funds, while Amazon allows donations to a variety of liberal organizations that include Planned Parenthood, the Freedom from Religion Foundation, and the SPLC itself, which is the 33rd largest recipient of AmazonSmile contributions.
A far-left organization that started with a noble goal of advancing civil rights, the SPLC has morphed into a group that currently exists primarily to smear conservatives and Americans of faith. And while many of its worst attributes were a long-kept internal secret scantly reported on in the local Alabama press, last year liberal publications such as the Washington Post and the New Yorker exposed SPLC’s scandals and finally admitted that it was little more than a fundraising machine whose “hate” system lacked credibility.
“The U.S. Justice Department has reached a settlement with dozens of conservative groups that claimed the Internal Revenue Service unfairly scrutinized them based on their political leanings when they sought a tax-exempt status, court documents showed.

In a pair of lawsuits filed in federal court in 2013, the conservative groups accused the IRS of targeting organizations with such words as “Tea Party” or “patriots” when they applied to the agency for tax-exempt status starting in 2010.

… [a] report did blame IRS officials for mistreating conservative organizations who sought tax-exempt status and that IRS officials covered up the misconduct and misled Congress.

Writing in the New Yorker, former SPLC staffer Bob Moser wrote that “it was hard, for many of us, not to feel like we’d become pawns in what was, in many respects, a highly profitable scam,” and went on to note that SPLC co-founder Morris Dees “viewed civil-rights work mainly as a marketing tool for bilking gullible Northern liberals.” Also last year, Dees and SPLC President Richard Cohen both resigned in disgrace when numerous allegations of sexual harassment, gender discrimination, and racial discrimination within the organization surfaced. However, the fundraising racket and unreliable hate labels that they created persist.

Today the SPLC is known mostly for publishing an annual “hate map,” which it claims is a census of the hate groups operating within the United States. In reality, this cynical yearly exercise is little more than a public listing of SPLC’s political enemies.

How else can one explain SPLC categorizing groups such as the Family Research Council and Alliance Defending Freedom (ADF) with the Ku Klux Klan? ADF is the nation’s preeminent legal advocate for religious liberty. Litigating to advance the principles espoused by America’s founders and enshrined in the U.S. Constitution, ADF has scored 10 victories at the United States Supreme Court since 2011. What exactly have the racists at the Ku Klux Klan done in that timeframe?

Everyone knows the Klan is a hate group. What the SPLC is trying to do is convince gullible leftists that conservative and religious organizations are morally equivalent to the KKK. It’s reprehensible and it’s fake news. And Amazon’s partnership lends a corporate veneer of credibility that only perpetuates this false narrative. Making this partnership even more duplicitous is the fact that the SPLC generates significant income – again from gullible leftists – through the AmazonSmile program.

At the Free Enterprise Project, we are fed up with Amazon’s support for these anti-religious zealots, and we are doing something about it. But we need your help.

We are calling on religious Americans and conservatives to stand up and demand an end to this insipid relationship. First, please sign our petition to voice displeasure with Amazon’s leadership. Second, if you are an Amazon investor, please vote for our shareholder resolution focused on the SPLC’s control over AmazonSmile.

In this resolution, we note that Amazon is engaging in viewpoint discrimination by letting the SPLC arbitrarily pick winners and losers for the Smile program. As leaders of a public company, Amazon’s board and management have a fiduciary legal obligation to act as stewards on behalf of all Amazon shareholders – not just those investors who hold radical leftist views.

The left is very adept at gaining traction for its shareholder proposals. It’s time to show businesses such as Amazon that conservative investors can also engage with the corporate ballot box and demand change.

Amazon, and many large American businesses, routinely take actions that offend conservative values. They do so with impunity because conservatives rarely coalesce to take on bad corporate actors and actions. It’s hard to fathom a corporate action more loathsome to the right than Amazon’s partnership with the SPLC. Let’s come together and put an end to it. 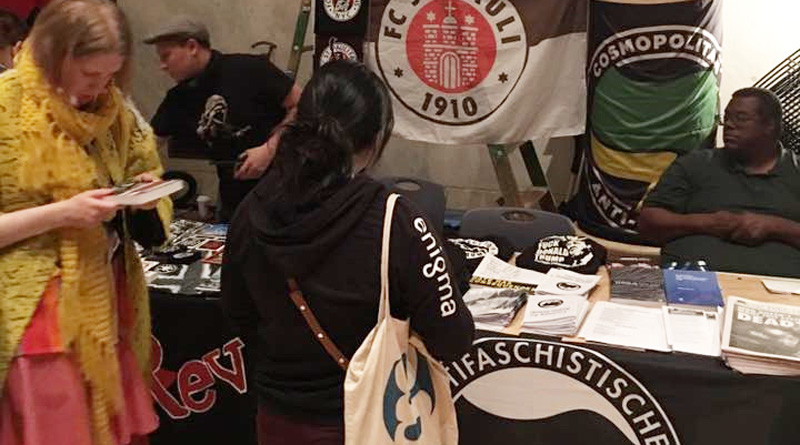 Daryle Lamont Jenkins (above upper right) of One Peoples Project

SOURCE: Justin Danhof is the general counsel of the National Center for Public Policy Research and the director of the Center’s Free Enterprise Project (FEP).